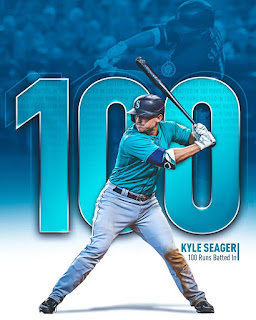 My annual "blueberry" entry seems to get further and further away from June every year.  The entry is my way of checking in on my feelings after the anniversaries of Gabriel's birthday and passing.  As the years go by, I don't really feel fewer emotions, but I have a more difficult time putting them into words.  The feelings and memories seem to get more complex as I watch the girls grow through the lens of a grieving mother, who cherishes her daughters, but mourns the baby she miscarried, the baby who died in her arms, and the babies she longs for but may never get to see.

I don't really know how to identify what I am feeling today so I guess it makes sense to talk about baseball until the thoughts come to me.

I've been a Seattle Mariners fan for over 20 years now.  Softball was the only sport I played growing up so it makes sense I enjoy baseball as an adult.  But there are a couple of concepts that really inspire my love of the game.  In high school I had a history teacher, Mr. Warner.  I took his class in summer school and didn't really get to know him well but what I recall starkly are his words, "If you want to know what is happening in American history, look at American baseball."  That's one reason I love baseball.

The other reason, the more important on a personal level, is the hope.  Hope holds on to the last minute in baseball.  Unlike football or basketball where you may see a team just running down the clock at the end, in baseball the game simply isn't over until that last out, until the ball is securely in the glove after a pitch or a hit or play.  As a fan, you get to hope right up to that last second.

The Mariners have had an unexpectedly good year.  They were a solid team with a future at the beginning of the season, but have proven themselves to be playoff contenders.  They are currently 2.5 games back from a wild card slot.  They are fighting hard.  The trouble is, their playoff hopes are significantly impacted by the performances of the teams above them.  The AL East has been a force all season, and currently holds the wild card slots.  The Mariners could win every game until the end of the season, but they also need other teams to lose to keep the hope alive.

But they can't do anything about those other teams right now, can they?  All they can do is play with that hope burning inside, with the confidence that it's not over until it's over.

I can hope, and I can play life with that hope.  I can live by that hope.  I've tried to.  I persisted in my hope of finding love after Sean died, and I did.  I clung to my belief that i would have my rainbow baby, and Eden and Delilah are my hope come to fruition.  It hurts, but I continue to envision myself with another baby in our home. I envision myself reunited with my lost babies.  I am Catholic, I have faith and I have hope.

Please don't take this to mean I'm not struggling.  I cry EVERY DAY.  I am at perhaps the lowest emotional point I have ever been, I just don't have the time to let it show.  Eventually, when I am far enough removed, I will talk in depth about the experience of subfertility and treatment but I can't let myself feel those feelings right now.

For 10 years, my life has gone on while my son's life has not.  That's an extremely painful road and words are insufficient to describe this hurt.  Perhaps hope seems to others to come easily to me, but it doesn't.  It is an active choice, and it's a hard choice to make every day.  I just don't know what else to do but keep on dreaming, even if it breaks my heart.

Andrea
On January 31st 2011, my son Gabriel was diagnosed with a fatal neural tube defect, anencephaly. It was one of the darkest moments of my life. But out of the darkness came a brightness I never expected. Gabriel's message is one of love, and it lives strong. My journaling began at http://www.caringbridge.org/visit/GabrielCude